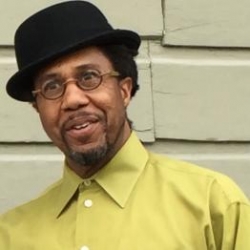 Professor Deterville is lecture faculty in the Africana Studies Department of San Francisco State University's College of Ethnic Studies. He teaches the course Black On-Line: Cyberspace, Culture, and Community.  As an artist, writer and scholar of visual culture he has lectured at museums, colleges, and universities on African and African Diasporic visual culture.

As the Co-founder of Sankofa Cultural Institute, he produced three symposiums on the history and aesthetics of Jazz. Deterville co-authored the book titled “Black Artists in Oakland” that was published by Arcadia in 2007 and is a columnist for the San Francisco Museum of Modern Art’s online publication called “Open Space.”  Professor Deterville's artwork has been shown both domestically and abroad. As a teaching artist, he designed lesson plans and curriculum to teach art to incarcerated youth in San Francisco. In 2015 he received the California College of the Arts ​Visual and Critical Studies department’s alumni award and was the second scholar to receive the honor. ​