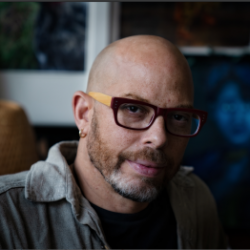 Mark Allan Davis, MFA, is a native New Yorker and an Assistant Professor of Africana Studies in Black Performance Studies/Dramatic Literature and Music/Theatre History at San Francisco State University’s College of Ethnic Studies. His explorations and research focus on the politics of the black body on stage and in dramatic literature, Black Lives Matter, the Politics of African-American Performance on Racial & Social Movements. Minstrelsy and Vaudeville on Broadway Song & Dance, as well as the reemergence and rediscovery of the impact and evolution of the Black Arts Movement on contemporary theatre & dance creation.  Mr. Davis is an Original Cast Member of ‘The Lion King’ on Broadway and is an accomplished director/choreographer, & dramaturg, and playwright, both domestically and internationally.