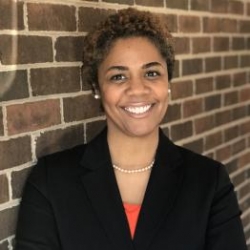 Kishia C. James, Ed.D. is Lecturer at San Francisco State University in the College of Ethnic Studies, where she lectures in the Department of Africana Studies. Professor James’s current teaching and research interests are Critical Black Pedagogy, Africana Studies, Critical Conscoius Educational Leaders, and Equity, Diversity, and Social Justice in Urban Education, focusing on school turnaround. She received her B.S. in Criminal Justice, M.A. in School Counseling, and M.A. in School Administration from North Carolina Central Univeristy. She received her Doctor of Education in Educational Leadership with an emphasis in critical thinking and social justice from Fayetteville State University.

She is a co-editor for The Gloria Ladson-Billing Reader text. She was nationally selected to participate in the 13thAnnual Asa G. Hilliard III and Barbara A. Sizemore Research Course on African Americans and Education in San Francisco, CA, but canceled due to the pandemic. Currently, she is writing her next book with Rowman & Littlefield Publishing Group, titled Turnaround Principals: Passionate Leaders Who Can Improve Low- Performing Schools. Her dissertation titled, Dismantling a Culture of Oppression: A Qualitative Study of Turnaround Principals in Predominantly African American Schools focused on highlighting the stories of the lived experiences of critically conscious principals who have demonstrated knowledge of the systems and structures that create and sustain inequity, had a sense of power or capability, and were committed to act against oppressive conditions and racial inequities in turnaround schools.